What I Wrote In February

It’s now March! Another month of writing done! February is over and from my perspective, it was a highly successful month indeed. Just how successful? Well let me break the stats down.

I like tracking statistics. Unfortunately, I’ve never really done it with my writing as extensively as I am doing now. I’d look at average per day, but it was different then. I viewed it as a tool to judge my performance rather than a tool to work to improve my performance. It was counter-productive. Changing that perspective has made a big difference.

Before I tarry too long in the nonsense of blah blah blah, let me breakdown the details in this handy spreadsheet that I took a screenshot of:

Here’s a chart to show the day-to-day writing (not including the 4 days this year with 0 words). 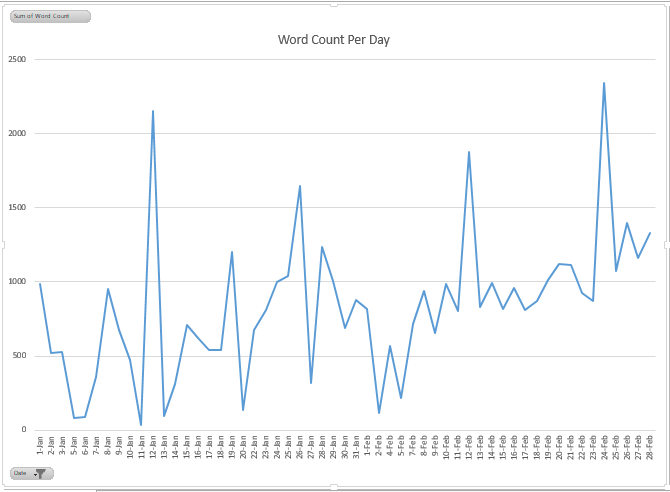 As you can see, I wrote 5,001 more words this past month than the month prior. Note, this was also done in 3 fewer days. Also, like I saw in January, the back-half of the month was better than the first half, 1129 words per day vs 680. (Note, that the first two weeks in February was worse than the last two weeks in January, yet not by much.)

I accomplished the two bigger goals that I set in the prior month’s analysis:

Having 75% or more of what I write be for projects in fiction: DONE. I achieved 83% In fact, I more than doubled the number of words I wrote in that category going from 314 a day to 751.

Getting up to over 1000 words a day by the end of February: DONE. The last 5 days were each over 1,000 words with 9 days total hitting that mark in February.

One of the biggest reveals in this look though is seen in the graph above. If I look at the data in the graph, I see that the data is a lot more stable than in January, where good averages in January are driven more from great days over a reliable habit. That’s a HUGE sign to me that I am more on the right path.

Obviously, writing content for my blog has taken a big hit. I am only now trying to take steps to resume posting regularly, although I am leaning heavily on a 3 or 5 days a week pattern rather than the every day. The point is to take the pressure off me, to refocus that energy into more quality content rather than volume.

Now for the goals for March.

I am sticking with the same pursuit I said in January, I would like to achieve 1500 a day by the end of the month. I want more than 1200 of that to be fiction, meaning that I want 80% or better. Beyond that, I want to also have 0 days this month where I get 0 words.

Beyond March I am going to start to see where I land on a stable number of words that I write where I am also able to revise and edit drafts without negatively impacting my word count. I think that it is going to be somewhere between 1200 a day and 1500. It might be higher. Eventually I will reach a peak where trying to get a regular count of more words will negatively impact other things in my life. I still have a job. I still have family. Any increase in word count beyond the sweet spot once I find it will be with diminishing returns until I maybe achieve the goal of writing full time.