It’s already a strange feeling being a fan of a team outside of the city you live near. A stranger in a strange land in a manner of speaking. Even stranger when the local team you live near is the Cubs, the World Series Champions. Not so weird because they are the champions, but that there also is another team there.

Some time around 7 years ago my wife and I moved our little family out to Chicago leaving behind the Delaware Valley and all things Philadelphia.

We are Phillies fans. Already an odd thing to be in Chicago where the question usually is Sox or Cubs, it became an embarrassing admission over the last few years to love the Phillies. Especially this year.

As of writing this, the Phils are the worst team in MLB. With only 42 wins, the only team close to that poor performance are the White Sox (who are largely ignored here in Chicago after last year’s World Series). It’s tough to love a terrible team. Even tougher when you live in another team’s city. Even tougher in a city hosting two other teams.

I’ve been a lifelong Phillies fan since the early 1980’s when I first learned baseball existed. It was largely due to living around Philly at the time and the Phillies were a strong team. Since then I’ve followed them from the good years to the bad to the glory years of the 2000’s. Now in 2017 they are having one of the worst years in my memory. 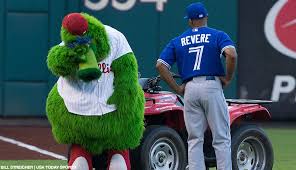 Admittedly I haven’t kept that close of an eye on their performance. I haven’t been willing to pay for MLB.tv so games are seldom available for me to see. And why should I? To see them lose? To continually find myself disappointed at the outcomes of the games?

I’ve kept up with the trades. The deaths (RIP Darren Dalton). A few of the other tidbits of news. But it is hard to get the motivation to follow it right now.

Baseball is already a tough sport to be a fan of with all of the other sports being active. Fortune has it that not many other American sports are active during the summer, but football, basketball, and hockey are coming fast.

Given the terrible season, the temptation to abandon them and ignore my fandom is creeping up on me. While I would never be able to truly give up on the Phillies, they aren’t making it easy to be a fan.

But then again: there’s always next year.